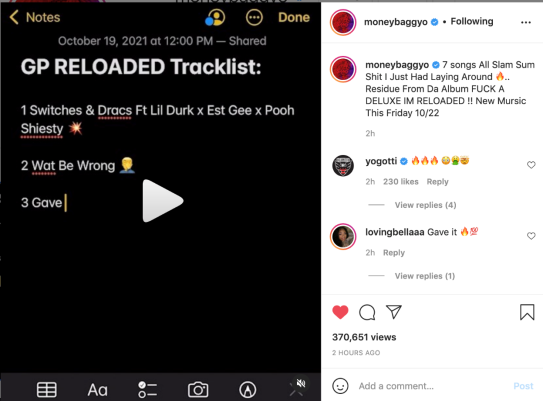 MoneyBagg Yo announces on Instagram that he will be releasing his A Gangsta’s Pain: RELOADED, that will release this Friday, October 20. The deluxe album will feature collaborations with Lil’ Durk, Pooh Shiesty, Bleu, Lil’ Wayne, Ashanti and DJ Khaled.

Memphis emcee released his original album at the beginning of April, in where, “Time Today,” and “Wockesha” were standout songs from the album that had resulted him having the No. 1 album on the Billboard charts. Currently, he is headlining his own tour that visited Atlanta this past weekend that has support from Big 30, Blacc Zacc and more.