Beyonce Reminisce of Her and Three Photos [SEE INSIDE] 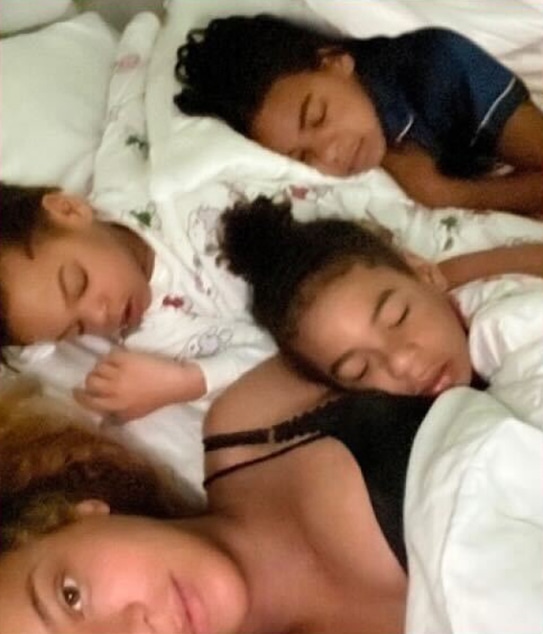 It looks like Queen B is surrounded by what matters the most, her children. Beyoncé has posted a photo of her lying in bed with her three-children surrounding her.

The Beyhive and the rest of the world is patiently waiting for her highly anticipated album, Renaissance, to drop July 29th. The Grammy winner celebrated the occasion by sharing a special message dedicated to her greatest inspirations: her children, Blue, 10, Rumi, 5, and Sir, 5.

“This three act project was recorded over three years during the pandemic,” she wrote on her website July 28 alongside a rare picture of her family. “A time to be still, but also a time I found out to be the most creative. Creating this album allowed me a place to dream and find escape during a scary time for the world.”

In her message, she describes the album was also a “beautiful journey of exploration.”

“I want to give a special thank you to Rumi, Sir and Blue for allowing me the space, creativity, and inspiration,” she added. “And a special thanks to my husband and muse, who held me down during those late nights in the studio.”

In the heartfelt ‘thank you’ letter she also thanked her parents for their guidance along her journey. Also, she thanked her “Uncle Jonny” and Godmother for exposing her to a lot of music and culture that served as inspiration for the album.

Of course, she didn’t leave out Beyhive.

“I hope you find joy in this music,” she added. “I hope it inspires you to release the wiggle. And to feel as unique, strong and sexy as you are.”